Palace and estate museum-preserve “Gatchina”
i
The State Museum-preserve "Gatchina" - is the former summer residence of the royal family, wonderful palace and park ensemble. Its outstanding palaces and the park - are ones of the most beautiful among countryside ensembles of Saint-Petersburg. 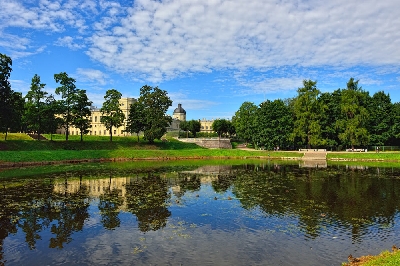 Finde the ticket prices on the web site of Gatchina museum: http://gatchinapalace.ru/en/Visiting/tickets.php

The most well-known sights - Must see! r
Palace and estate museum “Gatchina” is one of the most prominent palace and park ensembles of Saint-Petersburg. Its outstanding Gatchina Palace is the great architectural monument and Palace Park is a masterpiece of landscape art. Located also on the territory of “Gatchina” Priory Palace is an architectural symbol of Gatchina, it is a unique erection, the only monument of rammed earth construction of the XVIII century in Russia.

The city in architecture and monuments r
The history of the museum begins in 1765, when Catherine II presented the territory of the future palace and park ensemble, at that time – “Gatchinskaya miza” (Gatchina village), to general count G. Orlov as a gratitude for the participation in palace revolution, as a result of which she became an empress. In 1766 on the spot of Gatchinskaya miza the construction of the Grand Gatchina Palace for count G. Orlov was started. However, he couldn’t kive here, because he died in 1783. The empress bought the palace from count’s legatees and gave it to her son Paul, for whom Gatchina, subsequently, became the favorite place to stay. In 1795 the reconstruction of the Grand Gatchina Palace began and in 1798 the Priory Palace was erected by the design of architect N. Lvov. The Gorbaty Bridge, Cold Bath, Poultry-yard were built by the project of architect A. Zakharov. In 1828 Nicholas I made Gatchina his headquarters during spring and autumn actions in Krasnoe Selo. On 19 May 1918 Gatchina Palace was opened for visitors as a museum. During the Great Patriotic War the palace and park ensemble was hardly damaged. The palace and many park pavilions were burned, parks were cut down. After the war restoration works began in the park. Many park constructions were restored. Works on the recovery of the palace began as well, but it was held just for using the building. Restoration started just in 1976 and the first halls were opened for visiting in 1985.

Pictorial, photo, decorative and applied arts r
Paintings, statues, furniture, arms were purchased to decorate the residence. An outstanding halls of the Gatchina palace in architectural and artistic design are perfect example of Russian classicism style at the turn of XVIII - XIX centuries. During its long history the palace was restored and rebuilt several times. The biggest damage was caused during the Great Patriotic War. Restoration began in 1976; in 1985 the XVIII century Ceremonial halls were opened for the visitors. While visiting the Gatchina Palace you can listen an excursion and attend the exhibition "Family of Emperor Alexander III in Gatchina". The Priory palace is situated in a picturesque location on the shore of the Black Lake. Palace's walls, fences, buildings were erected by the technology of rammed earth. A retaining wall is made of the famous pudost stone, which was used in the construction of many buildings in Gatchina. The tower of the palace is built of paritsky stone. Priory palace was built in the Russian architecture style of the last third of the XVIII century; however, some of its parts, such as facades and ceilings, are typical for classicism. The combination of features of a medieval castle, monastery and a fortress makes the palace a unique one. Today you can listen about the history of its creation in a palace's tour, the history of the Order of Malta, about the technique of rammed earth construction and more. Also, in the Chapel a lot of concerts are held, which have found their regular listeners, who are attracted by excellent acoustics, light hall and great performers.

Man and nature r
Amazingly beautiful Gatchina park, also known as Palace Park, is the oldest one among the parks of Gatchina complex. Its square is 143 hectares. The centre of the park ensemble is White Lake, through which two main composition axis of the park go. The first axis begins from the Grand Gatchina Palace, go through Silver and White Lakes, Venus Pavilion and Berezovie Gate. Along this axis there are picturesque views on Grand Gatchina Palace, forestry of the Long Island in the direction of the Big Iron Gate near with Menagerie – the panorama of White lake opens up here. These two main directions are added with the alleys and paths of the park, which open the new view over the park.

Interesting for children l
Visiting of palace and estate museum “Gatchina” will become an interesting event for kids. Fascinating excursions, created especially for children, quizzes and games, the most popular is experimental program “Museum chests”, which will turn the ordinary visiting of the museum into a real game trip through the Gatchina palace. In “chests” kids will find the scenario of the route through the rooms of the palace, game props and materials for creativity.