State Academic Mariinsky Theatre
i
Mariinsky Theatre is the main opera and ballet theatre in Saint-Petersburg and one of the biggest theatres in Russia. On its stage you may see classic performances, which became the real masterpieces of dramatic art.
t
The most well-known sights - Must see! w Dramatic art w The city in architecture and monuments r
*
monuments, architecture, theatres and concert halls 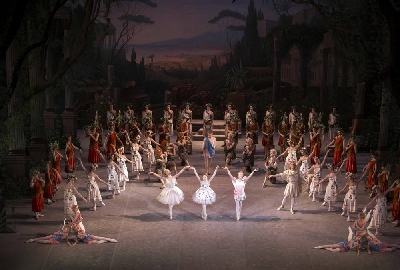 Prices for tickets for performances vary from 320 to 15000 RUR

The most well-known sights - Must see! w
State Academic Mariinsky Theatre is one of the greatest theatres not only in Russia, but in the whole world. For its two century history a huge number of worldwide famous artists performed on the stage of the Mariinsky Theatre and not less popular all round the world dramatics were put on the stage.

Dramatic art w
For its two century history a huge number of worldwide famous artists performed on the stage of the Mariinsky Theatre, among them F. Chaliapin, O. Petrov, I. Ershov, S. Preobrazenskaya, M. Kschessinskaya, A. Pavlova, V. Nizinsky, G. Ulanova, R. Nureev, M. Barishniko. Undoubtedly the Mariinsky Theatre became so popular not only thanks to the outstanding artists but also to the legendary works, which were put on stage in different times. Among the most remarkable works are “Boris Godunov” by M. Mussorgsky, “The Maid of Pskov”, “May Night”, “The Snow Maiden” by N. Rimsky-Korsakov, “Prince Igor” by A. Borodin, “The maid of Orleans”, “The Enchantress”, “The Queen of Spades”, “Iolanta” by P. Tchaikovsky, “The Demon” by A. Rubinstein, “The Oresteia” by S. Taneyev and also an outstanding performances “Giselle”, “La Esmeralda”, “Le Corsaire”, “La Bayadere”, “The Nutcracker”, “The Firebird” and legendary “Swan Lake”.

The city in architecture and monuments r
Mariinsky Theatre originates in 1783, when by the decree of the Empress Catherine II the Great Theatre was founded in the building, which was later reconstructed for Saint-Petersburg Conservatory. The Great Theatre belonged to the Imperial Theatres of Russia. On 12 July 1783 the theatrical committee was founded for "managing the performances and music". 5 October 1783 Big Stone Theatre was solemnly opened on the Karuselnaya Square (nowadays Teatralnaya). From that theatre the history of Mariinsky Theatre began. In 1859 the theatre-circus, which was located in front of Great Theatre, was damaged by fire. On its spot the architect A. Cavos built the new theatre, which was named after the wife of Alexander II, Empress Maria Aleksandrovna. The first theatrical season was opened on 2 October 1860 with "Life for Tsar" by M. Glinka. In 1886 the old building of the theatre was reconstructed for conservatory and all repertoire was transferred to the stage of Mariinsky Theatre. In 1920 the theatre was renamed as the State Academic opera and ballet theatre, since 1935 it was named after S. Kirov. On 16 January 1992 the historical name was returned to Mariinsky Theatre.