Old Saint-Petersburg Stock Exchange is the architectural monument, which was built in 1805-1816 by architect J. Thomas de Thomon. The Stock Exchange building is the compositional center of architectural ensemble of The Spit of Vasilyevsky Island. Originally the building was constructed for the Saint-Petersburg Stock Exchange, but its designation was changed through the years. The Old Stock Exchange building was designed in Greek Revival architectural style, it has a rectangular shape and is situated on the lofty stone platform. The building is an outstanding example of classicism style. The two-storey edifice with big semi-circular windows is surrounded with the sublime Doric colonnade. The grand staircase leads to the main entrance of the building. Its facade is decorated with the sculptural composition “Neptune with two rivers”, which was made by sculptor S. Suhanov from the pudozski stone (kind of limestone). The sculptural composition represents god of the sea Neptune with a crown on and with trident in his left hand, driving out on the chariot with four horse harness. Near Neptune there are two figures: on the left – female figure embodying the Neva River, on the right - male figure symbolizing the Volhov River. On the opposite side of the Stock Exchange building there is a sculptural composition “Mercury with two rivers”. The sculptural groups accentuate the connection of the building with trade and water element. Since 1940 there was the Central Naval Museum, however in 2007 the museum was closed and now it is supposed to be removed to another place. 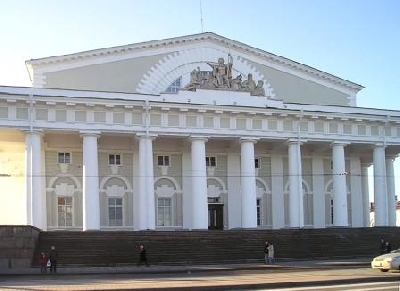 This object is not available for visiting but it is possible to enjoy its achitectural image twenty-four-hour.

The city in architecture and monuments r