Sand Sculpture Festival will be launched in St. Petersburg 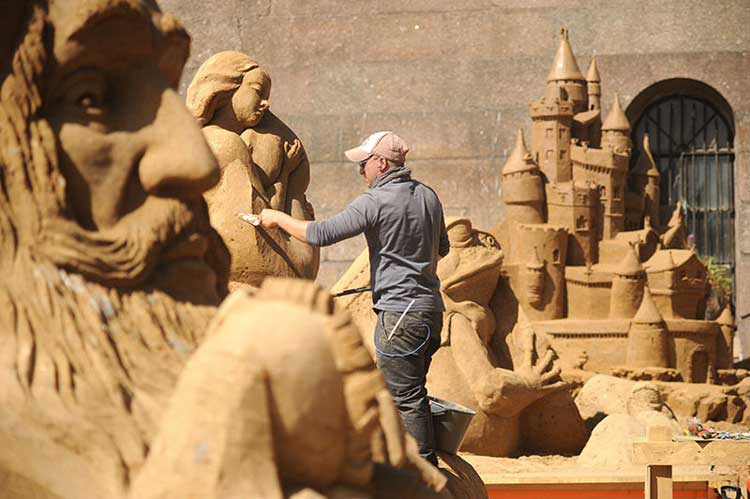 On May 27, the annual Sand Sculpture Festival will be launched in the heart of St. Petersburg. On the beach in the Peter and Paul Fortress, the work is in full swing again. On banks of the Neva, huge sand cubes have already grown which will soon turn into impressive designs. The subject of the 2017 Sand Sculpture Festival is Russia the Great. It is about a desire to show all the heart-blood things associated with an image of the country in hearts of its residents.

The Festival will take over four months, so sculptures are being made with long-term resistance to the elements in mind. Due to bad weather conditions, the work on sculptures started later than usual. Nevertheless, everything is proceeding according to plan, and all the sculptures will be completed on time.

There will be all-time records we cannot also do without. If in 2016, the elegant eight-meter fairy-tale castle burst upon the visitors’ admiring eye, this year, we will shock spectators with a nine-meter model of the Moscow Cathedral of St. Basil the Blessed.

The Festival will show sand reminiscences of battles from the 1812 Patriotic War and the Great Patriotic War. In the year of the 100th anniversary of the 1917 October Socialist Revolution, visitors will see the legendary Aurora cruiser and Vladimir Lenin, leader of the world proletariat. Subjects of the Siberia conquest and space exploration will find their reflection in the Festival, as well as Soviet sports and the 1980 and 2014 Olympics, national movies, animated cartoons, Russian classic works of literature, folk tales and even the Leningrad underground music. Founding of St. Petersburg design will take one of central stages in the Festival. A huge sandbox of a hundred square meters for kids will be built again, this time with a surprise.