Rostral Columns, which are located on the Spit of Vasilyevsky Island, are not only architectural monuments but also one of the main symbols of victories of the Russian Fleet. The Rostral Columns were constructed in 1810 by the design of the architect J. Thomas de Thomon, who decided to decorate them with rostras (from Latin – prow of ship), because they symbolize the might and greatness of Navy. The columns are made from the pydozski stone (kind of a limestone). Each column is 32-meter high. Inside the columns there is spiral staircase and on top of each column there is the metal tripod, which holds the lamp. The torches on the Rostral Columns are lighted during the special holidays and ceremonies. At the foot of the Rostral Columns there are monumental statues – two male figures, symbolizing Dnieper and Volkhov Rivers, and two female figures, which symbolize Neva and Volga Rivers. The sculptors of the statues are J. Kamberlen and J. Tibo. The Rostral Columns are one of the main elements of the Spit of Vasilyevsky Island ensemble.

t
The most well-known sights - Must see! w The city in architecture and monuments w Captivating views w Military and political history r
* 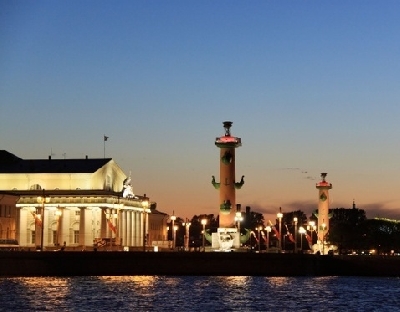 You can enjoy the architectural image of this object twenty-four-hour.

The most well-known sights - Must see! w
The city in architecture and monuments w
Captivating views w
Military and political history r