The Admiralty takes one of the most important places in the military history of the city and country because it is the birthplace of the Russian Navy. It is the complex of buildings where the Main Admiralty of Russian Empire used to be situated. Nowadays it is a monument of the naval history.

The Admiralty was built in 1704-1706 by the design of architect I. Korobov. The building is decorated with different sculptures, which images are connected with the marine legends and myths. Many famous sculptors took part in the designing process of the sculptures: S. Pimenov, V. Demut-Malinovskiy, A. Anisimov, F. Shedrin, I. Terebenev and others. Reliefs, which depict the Greek goddess of justice Themis awarding warriors and craftsmen, are located in the pediments of the side porticos. The central arch is adorned with the statues of nymphs, who stand on the high pedestals and carry the globes. Above the arch there are soaring Glories and allegorical bas-relief "Establishment of fleet in Russia". In the corners of the first tier there are figures of antique heroes: Alexander of Macedon, Achilles, Ajax and Pyrrhus. Above the colonnade there are 28 sculptural allegories: fire, water, earth, air, four seasons, four cardinal directions, muse of astronomy - Urania and patroness of sailors - goddess Isis. This sculptural groups form the image of Russia as naval world power.

The famous ship on the spire of the Admiralty is one of the main symbols of Saint-Petersburg. The first ship was set up in 1711 during the reconstruction of the building. Under the ship the gilded ball, below which there was round moneybox from pure gold, was established. In this moneybox all the examples of gold coins, which were made in Saint-Petersburg since its foundation, were placed. This ball was never opened due to the irretrievable lost of the secret of its opening. The first ship occupied its place till 1815, when it was substituted for the new one, and the riginal ship was mysteriously lost. The second ship was replaced in 1886 by the exact copy as a result of the reconstruction works.

There is a supposition that the first Russian military ship-frigate "Oryol", which was built in 1667-1669, became the prototype of the Admiralty ship. There are several legends, according to one of which three flags on the ship's masts are made of pure gold, and in the ship's bows there is the personal surveying compass of Peter I. Also there is an assumption that the Admiralty ship has the same image as the first ship, which enter the just built port of Saint-Petersburg.

Nowadays the headquaters of the Main Navy Staff is situated in the Admiralty. 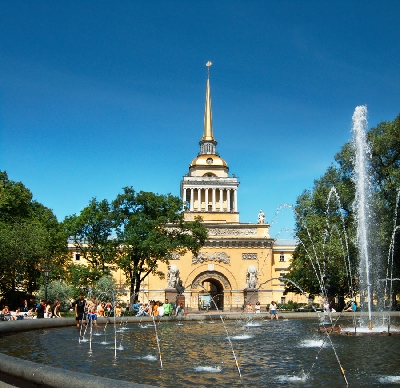 This object is not available for visiting but it is possible to enjoy its architectural image twenty-four-hour.

The city in architecture and monuments w
Man and nature r