Home / Russia / St. Petersburg / Where to go? / The Church of the Savior on Spilled Blood

The Church of the Savior on Spilled Blood

Church on Spilt Blood
Church of the Resurrection of Christ
i

The Church of the Savior on Spilled Blood is the prominent architectural monument, the biggest Orthodox church of the city, which was erected on the place of death of the emperor. One of the biggest collections of mosaic decoration in Europe. The church has a museum status. 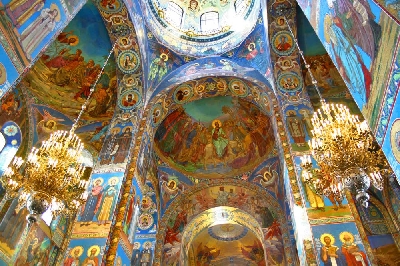 The most well-known sights - Must see! w
Church of the Savior on Spilled Blood, also known as the Church of the Resurrection of Christ, is one of the most prominent monuments of Russian architecture. Its outer decoration and the interior are the real masterpiece and annually attract a lot of tourists from all over the world. The audio guide service is available for visitors.

Religion and philosophy w
Since its consecration on the 19th of August 1907, the church of the Savior on Spilled Blood was not a parish church and was not meant for mass visiting. Here the certain services, devoted to the memory of Alexander II, were held. In 1920 it was decided to give the temple to the parish. In 1923 the church became a cathedral of Petrograd eparchy. In 1930 by the decree of the All-Russian Central Executive Committee the cathedral was closed. During the Siege of Leningrad in the cathedral there was a morgue, here all the dead were brought. After the war the church was taken by Maly Opera Theatre for storing all its decorations. In 1971 the temple was transferred to the balance of “Saint Isaac’s Cathedral” museum. In 1997 the museum-monument “Savior on the Spilled Blood” was opened again for visitors. On the 23 of May 2004 the first liturgy after 70-year break was served.

The city in architecture and monuments w
The cathedral was built in 1883-1907 by architect A. Parland and Archimandrite Ignatius (Malyshev). The church of the Savior on Spilled Blood got its name because it stands on the spot where Alexander II, the Emperor of Russia, was mortally wounded on 1 March 1881. Then it was decided to build a chapel on the attempt spot. In 1881 the temporary chapel was consecrated and memorable services for the dead were held in it. In 1883 the construction of the new church began, it lasted 24 years. In the décor of the church different decoration materials were used – brick, marble, granite, enamels, gilded copper and mosaic – that made the image of the church such vivid and outstanding. Inside the church there is a real mosaic museum, the area of the mosaic covering is 7065 square meters. Also in the church you may see the richest collection of the semiprecious stones, jewelry enamel, colored ornamented tiles, which were made by the best artists. The special place in the church is the canopy right on the spot where Alexander II was wounded.