Home / Russia / St. Petersburg / Where to go? / Monument to Nicholas I on the Saint Isaac's Square

Monument to Nicholas I on the Saint Isaac's Square

The monument to Nicholas I on the Saint Isaac’s Square is the prominent architectural monument, it completes harmoniously the ensemble of the square. The author of the monument’s project is architect Auguste de Montferrand, the sculptor of the statue is Peter Klodt. The monument to Nicholas I was constructed in 1856-1859. By the Montferrand’s idea the equestrian statue of the emperor should be on the pedestal decorated with bas-relief, which narrates about the 30-years reign of Nicholas I: 1825 – the emperor leaves the Winter Palace to suppress the Decembrist uprising handing his son to the soldiers (the future Emperor Alexander II); 1831 – Nicholas I appeals to the people on the Sennaya Square during the “cholera riot”; 1832 – Nicholas I decorates Speranskii with the order for the publication of “Complete code of laws of Russian Empire”; 1851 – Emperor looks round the Verebinski bridge during the ceremonial trip by the new Moscow railway. It is an interesting fact that the monument to Nicholas I is situated on the same axis with the famous monument to Peter the Great “The Bronze Horseman”, they are separated only by Saint Isaac’s cathedral. In 1930s the monument was meant to be removed. In Soviet times in Leningrad there was no place for the monument of the emperor. But it was preserved because of its uniqueness - the equestrian statue stands just on two footholds (horse’s hooves) due to accurate reckoning of its center of gravity and lead shot, which was poured in the horse’s croup. 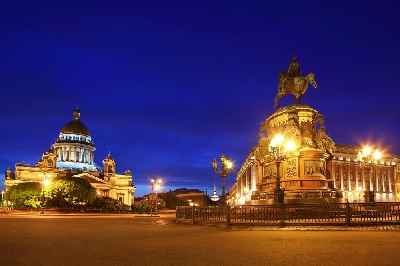 It is possible to enjoy the architectural image of the monument twenty-four-hour.