Smolenskoe Cemetery is the Orthodox cemetery, which is located in the Western part of Saint-Petersburg on the Vasilyevsky Island near the Smolenka River. The cemetery was established in 1756 by the decree of Senate. Smolenskoe cemetery is the burial place of the prominent scientists and cultural workers: architects, writers, artists, actors, mathematicians, statesman, historians and many others. The most popular burial place on the cemetery is the grave of Saint Xenia of Saint-Petersburg, where the chapel was built, which became one of the most honored places for pilgrims from all over Russia.

On the territory of the cemetery there is Smolenskaya Church, which is one of the oldest Orthodox churches in Saint-Petersburg. It was built in 1786-1790 by the design of architect A. Ivanov in early Russian classicism style. In 1790 the church was consecrated in honor of the Theotokos of Smolensk. The church is a right-angled edifice with two-storey belfry, which was painted in blue and white colors. The belfry is topped with the grey spire with the cross. The second tier of the belfry is decorated with the Corinthian pilasters. Each side of the tier is topped with triangular pediment. The church is topped with the low grey cupola on the low drum with arched windows of Byzantine style. The cupola is crowned with lantern, which is topped with the dome with a cross. Smolenskaya church is functional, the services are held here regularly. 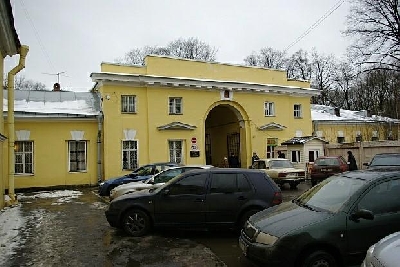 While visiting an Orthodox church it is necessary to follow several rules. It is forbidden to sit in church (unless you have health problems). You should speak very quietly in order not to disturb people around you. Men should take off hats or caps before entering a church; on the other hand, women should cover their head. According to the strict canon laws, women should not enter a church in trousers, short skirts, or with make-up on their face.