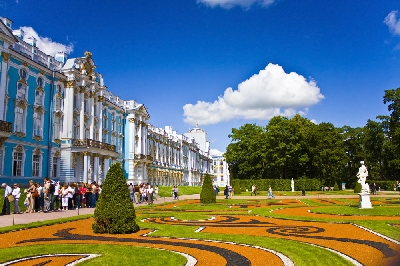 The most well-known sights - Must see! w
Palace and park ensemble of the State Museum-Preserve "Tsarskoye Selo" is one of the prominent and beautiful former summer residences of Saint-Petersburg. Its Catherine Palace with worldwide famous Amber room is undoubtedly is worth of notice, as well as Catherine Park, Alexander Palace and Alexander Park.

The sights - record-holders w
The greatest interest for foreign and Russian tourists is the Amber Room. The origin and following histories are covered with a mass of myths and legends. There is evidence that the Amber Room was originally designed for suburban residence of the Prussian Queen Sophie-Charlotte by architect I.-F. Eozanderom. However, her death has stopped works, and amber panels were not fixed in the palace of the queen. Then the architect decided to fix them in another palace - Oranienburg. However, here the panels were not fixed as well. In 1712-1713s during the visit to Berlin, Peter I liked the amber panels. When Peter I met with Frederick William I in November 1716 in honor of connection between Russian and Prussian alliance, the Prussian king gave gifts to the Russian emperor, among which the Amber Room was. The Amber Room, which was finished in 1746, was used for official receptions. Although in reconstruction process of the Winter Palace, it was often carried from place to place. In July 1755 the Empress Elizabeth ordered to F.-B. Rastrelli to build a new Amber Room for the Grand Palace in Tsarskoye Selo. So, a new almost two hundred year epoch of glory of "the eighth wonder of the world" in Russia began in its second home. But during the World War II German army broke into Pushkin town, they reached down amber panels and sent to Konigsberg. In 1944, due to the retreat of the Germans, the panels were again taken to pieces, packed into boxes and transported to an unknown destination. Since that time, the traces of Amber Room are lost. Its searches had no results yet. In July 1979, the Council of Ministers of the RSFSR adopted a decision about the restoration of the amber panels, so the works started in 1983 by architect A. Kedrinsky. The work upon the recreation of "the eighth wonder of the world" lasted for 24 years, and by the 300th anniversary of St. Petersburg the legendary Amber Room was fully restored and started to receive guests.

The city in architecture and monuments w
On the spot of the future Tsarskoye Selo there was a small manor "Saris hoff" (in Finnish - "country house on the hills"), and in Russian - "Sarskaya miza", which was pointed on the Swedish maps of XVII century. Right after the Great Northern War the manor was presented to A. Menshikov, who was appointed governor-general of this territory, and on 24 June 1710 by the decree of Peter the Great it was given to his future wife Ekaterina Alexeevna (the official wedding of Peter I and Catherine II took place in February 1712) and was included in the list of court territories. In 1710-1720 on the spot of the manor the tsar's summer residence began to be created. Gradually the ensemble planning was regulated. Soon the "Sarskaya miza" was called "Sarskoe Selo", and with the beginning of the palace construction it got the status of "Tsarskoye Selo" (in Russian - Tsar's village"). Over the two centuries Tsarskoye Selo was the main summer imperial residence, construction of which had a state value and was held with the participation of government departments. After the October Revolution the palace and park ensemble was turned into museum and the best buildings of the city were given for the educational and institutions and health centers for children. As a result in 1918 the city was renamed in Detskoe Selo ("Kid's village"). On 9 June 1918 Catherine Palace was opened as a museum. In 1937, in honor of the 100th anniversary of the tragic death of the great poet A. Pushkin, the city, where future poet educated in Imperial Lyceum, was named after him. In 1983 the palaces and parks of Pushkin city got the preserve status, which in 1990 got its modern name - the State Museum-Preserve "Tsarskoye Selo".

Pictorial, photo, decorative and applied arts w
Catherine Palace is one of the largest imperial palaces in Tsarskoe Selo, and also one of the most majestic and amazing with its beauty. Creation of the palace started in 1717 by the decree of Catherine I. Initially, the project of the palace belonged to architect I.-F. Brownstein, but the palace construction was completed in different periods of time, also it was expanded and rebuilt under the direction of architects A. Kvass, C. Trezzini S. Chevakinsky, F.-B. Rastrelli, C. Cameron, V. Stasov and others. The palace, built in the baroque style, has the facades with columns and gilded ornaments. The fronts are decorated with the figures of Atlantes and other moldings. The interior décor of the palace amazes by its beauty and elegance of ceremonial and residential halls. Currently, 32 rooms from the 58 rooms, which were destroyed during the war, were recreated. The main staircase, the front suite, Green dining, Service room, Blue entrance, Chinese Blue living room, Bedchamber and other halls and rooms reflect the preferences and tastes of the emperors and empresses, who lived here. In Catherine Palace you can visit the exhibition "The Romanov dynasty in Tsarskoye Selo", which introduces the objects and materials, associated with the crowned owners of Tsarskoye Selo residence - from Elizabeth to the last Russian Emperor Nicholas II. Parade portraits are on view for visitors, as well as court-dress coats, furniture, bronze and porcelain items. The exhibition "Alexander Memorial room I» is very interesting as well, the memorial things of Alexander I are represented there, which were preserved in the museum, and many of them are shown for the first time. Alexander Palace was built by the decree of Catherine II in 1792-1796 for the wedding of her grandson, Grand Duke Alexander Pavlovich (the future Emperor Alexander I) and the Grand Princess Elizaveta, who entered the palace in 1796. The primary project of the Alexander Palace belonged to architect G. Quarenghi, but the next years many other well-known architects participated in rebuilding and decoration of the palace - L. Ruska, K. Macaire, S. Cherfolio, A. Tone, V. Stasov, D. Efimov, A. Stakenschneider, A. Vidov, S. Danini, R. Meltzer. Alexander Palace is an elongated two-storey building with annexes on the sides; in the center of the main northern facade two rows of columns compose through Corinthian colonnade. From the regular part of the Alexander Park the facade of the building is made as semi-rotunda topped with the spherical dome. The important events in the political life of the country were held in the palace. The last 13 years of the reign of Emperor Nicholas II went by here. In the morning August 1, 1917 the Royal family was exiled to Tobolsk right from the Alexander Palace. At the beginning of the XX century in the Alexander Palace almost all the important events related to the Russian public life occurred: receptions of ambassadors and foreign dignitaries, anniversaries celebrations - the 300th anniversary of the Romanov dynasty and the 200th anniversary of Tsarskoye Selo.

Love and romance r
Palace and park ensemble "Tsarskoye Selo" is one of the popular places for the lovers of romantic walks, especially, for newlyweds, who came here to make wedding photo calls. Shady alleys of the park, paths, green plantations, great landscapes create a wonderful romantic atmosphere.

Man and nature r
Catherine Park is one of five parks in Pushkin, with the total area of 107 hectares. The park consists of a regular old park and landscaped English Gardens. Old Park, sometimes it was called the Dutch one, was laid out by Dutch masters of landscape works J. Roozenom and J. Vogt in 1720. At the beginning of the XVIII century the garden was expanded and decorated with sculptures, pavilions "Hermitage" and "Grotto" were designed as well as Sliding Hill. The complex of Admiralty, Hermitage Kitchen, Upper and Lower bath were built in 1770. On the territory to the south from the palace, around the Great Pond, English landscape park was laid out, V. Neyelov began the work, and garden master I. Bush completed it. Great Pond was re-designed and turned into a lake, rectangular outlines of the lower pool were also rounded. The Tower Ruin, Cesme, Moreyskaya and Crimean columns, Kagul Obelisk, Turkish and Turkish kiosk cascade were built in the 1770-1780 in honor of the Russian victories in the Russian-Turkish wars. Also, at the empress’s dictation the pavilion "cold bath" with the Agate Rooms and the Cameron Gallery, Concert Hall and other classic buildings were erected. Alexander Park also is one of the five parks in Pushkin; its total area is about 200 hectares. The park adjoins the Catherine Palace from the main entrance. Alexander Park is divided into the new park and the landscaped garden. The New garden was laid out in 1740 under the guidance of K. Shreydera and M. Kondakova. On the territory of the New Garden it is a large Chinese bridge, which is made of pink granite parapet, decorated as a large stone vase with trailing branches of red coral (forged from iron); curtain "Mushroom" is a large group of several dozen trees and shrubs of the same breed, the mountain "Parnassus" is an artificial mound, to which top the twisting road, planted by trees, leads; Chinese Theater, Dragon Bridge, Cross bridge, the Big and Little caprice - artificially made banks with arched spans over the road; the Chinese village. The Landscape Park was originally a part of the natural forest, which was attached to the palace; it was fenced and had a menagerie, where there were wild animals for the royal hunt. Today on the Landscape Park territory the White Tower is located, this pavilion was inspired by the image of a medieval knight's castle, Pavilion "Chapelle", Pavilion "Arsenal", the Farm Complex, Ratna Chamber, Islamic Pavilion, Children's lodge, Krasnoselskie Gates, Guardhouse Elevaya.